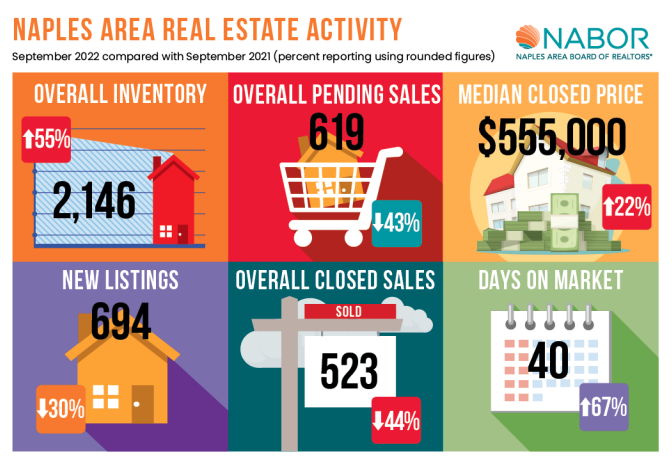 The impact of Hurricane Ian, as witnessed on the last two days of September, is not reflected in the September 2022 Market Report by the Naples Area Board of REALTORS® (NABOR®),
which tracks home listings and sales within Collier County (excluding Marco Island). Given this, September’s data showed a predictable pattern of slow closed and pending sales with a slight increase in inventory, which is traditionally the case in historically stable Septembers. While the report captured activity prior to Hurricane Ian’s arrival, broker analysts who reviewed the report on October 18th are confident Naples’ recovery will be swift and the resiliency of its home values will be protected.

“There is indeed significant loss, yet the full scope of [the hurricane’s] impact was limited to a specific area along the coast and tributaries [in Collier County],” said Budge Huskey, CEO, Premier Sotheby’s International Realty. “Such an event always brings with it a rebuilding boom, and most people will make the decision to restore and improve rather than exit the area. It’s remarkable how quickly progress is being made each and every day.”

Mike Hughes, Vice President and General Manager for Downing-Frye Realty, Inc., added that “Unlike Hurricane Irma, Hurricane Ian was not a severe wind event so roughly 80 percent of the county was not severely affected except for landscaping debris cleanup.”

Not surprising, several broker analysts said there has been an increase in buyer interest for homes in communities east of U.S. 41 since the storm. Adam Vellano, a Naples Sales Manager at Compass Florida, remarked that, “Some homes have been withdrawn from the MLS, some have been terminated, but there’s also been a steady flow of new listings in these last two weeks.”

Obviously, some properties in Naples that experienced damage from the hurricane will come off the market because they will need to be assessed by insurance adjusters and undergo repairs. But unlike harder hit Lee and Charlotte counties, very few properties in Collier County were destroyed.

A considerable number of businesses and properties that experienced the storm’s surge were swift to recover. Major area attractions like the Zoo, popular restaurants and golf courses have already reopened. Vellano added, “If you visit our popular shopping districts today, you’d be hard pressed to recognize we had a major hurricane event two weeks ago.”

Molly Lane, Senior Vice President at William Raveis Real Estate, who lived in Connecticut during two major storm flooding events said we might see “FEMA change the base flood elevation on new builds.” Though many spec homes built west of 41 are already 10 feet above sea level and the vast majority appeared to avoid serious flooding during Hurricane Ian.

Broker analysts that reviewed the September 2022 Market Report are concerned national media’s portrayal of the storm’s destruction is influencing the public’s perception of the housing market in Collier County. Hughes said, “A lot of people who visit Naples are assessing their winter plans now. They are trying to figure out whether they should come down and it doesn’t help that our area is part of the media’s narrative when reporting on the hurricane’s destructive effects. It is simply not the case. Naples is well positioned to bounce back, and it will quickly.”

Spencer Haynes, Vice President of Business Development and Broker with John R. Wood Properties, assures the public and NABOR® members that September’s Market Report did not reveal any surprises and that instead of spending time analyzing the report you spend the time helping human service organizations that provide direct recovery support.